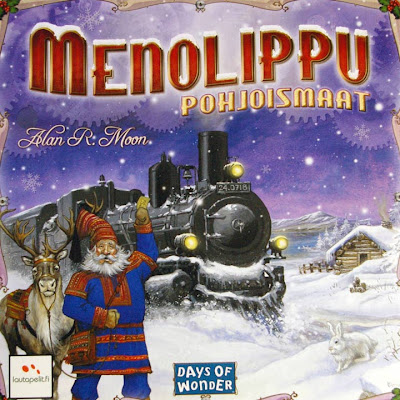 So Barb's conveniently-relocated Uncle Gary returned to the US last week with a specially-obtained copy of Ticket to Ride: Nordic Countries (that's Menolippu Pohjoismaat in Finnish) for us.
Awesome game. So awesome that they didn't release it in the US when it came out almost 2 years ago. Then, they promised some copies for release in the US market (this was after Uncle Gary had succeeded in acquiring a copy for us). Then they released them two weeks ago. Now they're out of print again.
You can't make this stuff up. Check your friendly local game store to see if they've still got copies. You won't regret it. If you haven't played any of the TTR series, you're in for a treat no matter which version you buy (although if you get the US version, buy the 1910 expansion with it, as it upgrades the freakishly tiny cards that come with the main set).
Posted by Stewart Bushman at 1:27 PM