For those not in the know (i.e. most of my readers), I attended the New Jersey Governor's School in the Sciences (NJGSS) 16 years ago. Technically that made me one of the top 100 science students in the state of New Jersey, but it's entirely possible that 1990 just had a weak draft class. Regardless, the New Jersey Governor's School was founded by Gov. Tom Kean back in 1983 as a program for the best and brightest of the Garden State. We attend a state university (Drew U. for NJGSS) for three weeks during the summer between our junior and senior years. At the NJGSS, I took classes in Optics, Forensics, and Quantum Mechanics and did a lab class in High Speed Photography where I took this picture: 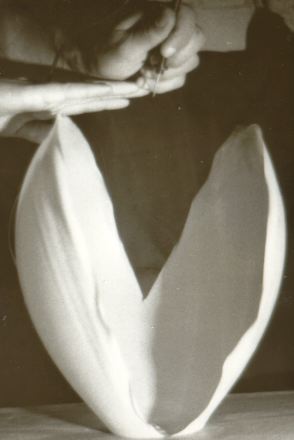 It suffices to say that while the whole thing was a bit dorky, we were all dorky, so it was fun. Easily one of the best summer experiences I ever had. I even went to college with the lovely, talented, and now Dr. Jenn Best, whom I am still in infrequent touch with.

Can you find me in these pictures? 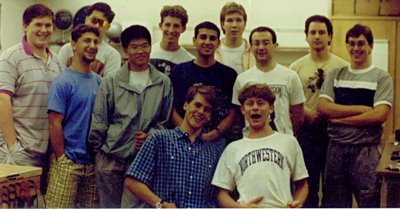 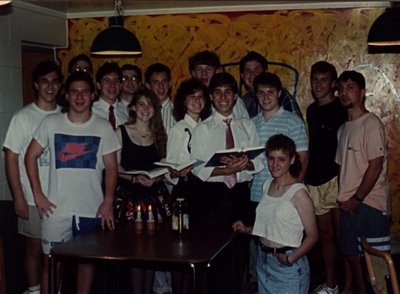 I can still probably name at least a third of those people. NJGSS was the last thing I did in Jersey before we moved to Baltimore, and it's always held a special place in my heart.

So imagine my surprise when I got the following email 2 days ago:

Dear 1990 NJGSS Alums,
You may have heard that the Gov School program is not included in the NJ budget. If funding is not received, the NJGSS program will be cancelled. We are asking for your help to rally the NJ legistators. Attached is a list of suggestions from the director of all of the Governor's Schools. We'd appreciate any help you can give us!

Needless to say, I'm very disappointed in Gov. Corzine. So I've fired off the following letter to him:

While I am no longer a New Jersey resident, I grew up in Morris County and will always consider myself a New Jerseyan. One of the greatest experiences I was fortunate enough to participate in during my youth was the three weeks I spent at the New Jersey Governor's School in the Sciences in Drew University in 1990.

I'd hate to have to start referring to NJGSS as a program in the past tense. Your name is already on the school, Governor. Please don't take it off.

I also sent a letter to Tom Kean, Jr., a NJ State Senator and son of the founder which replaced the last two sentences with, "Your father started that school, Senator. Please don't be the one who stopped it."

Maybe a bit melodramatic, but let's see what happens.

Posted by Stewart Bushman at 7:45 PM

Holy Crap. That photo is a blast from the past. I remember you. Do you remember me? :-) Real blog: http://blog.debtjoa.com.