A few weeks ago, the Long Range Reconnaissance Imager (LORRI) on New Horizons took its first pictures of Jupiter. The spacecraft was close to solar opposition, so the moons in front of Jupiter, Europa and Io, were leaving large shadows on the planet's swirling clouds. This picture was released yesterday: 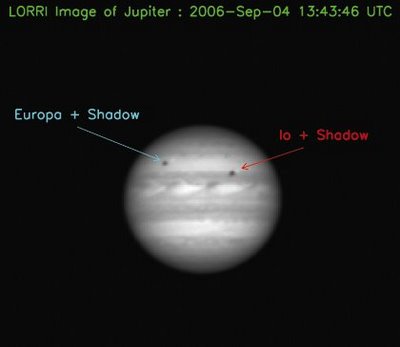 LORRI doesn't have color capability, but Ralph will be sending back color pictures of the gas giant during the rendezvous/gravity assist in January and February. One thing I like about this picture is that it's the first image of Jupiter that I've ever seen that doesn't show the Great Red Spot.
Posted by Stewart Bushman at 10:44 AM No comments:

My Eagles are back. I stand by my prediction that they'll be 6-1 going into the Jacksonville game on 10/29.

Fantasy-wise, I was running on all cylinders. I went 4-0, and Barb clocked her first win of the sason, against my dear brother, who's now on a losing streak.

Barb had the misfortune of going against Matt Hasselbeck this week, otherwise she might've pulled out the victory. Still, a respectable showing for the Bushmans.
Posted by Stewart Bushman at 10:21 AM No comments:

While I'm a big fan of my friends Phil and Derek's cooking site, Burnt Fat, I have been known to look elsewhere for inspiration. Today I bring you two examples, from the sublime to the somewhat horrifying.

Sublime: Jeff's Famous Pizza exhaustively shows you how to make a true Neopolitan-style pizza in your own oven. It may require a little engineering on your part, but Jeff talks you through it.

Horrifying: Dishwasher-Poached Salmon. Need I say more?
Posted by Stewart Bushman at 10:15 AM No comments:

I'm not even going to discuss the egg that my Eagles laid on Sunday. I'll just focus on the fact that they're tied with the Cowboys and Giants for the division lead at 1-1. Also, looking to the future, they play the 49ers, Packers, Cowboys, Saints, and Tampa Bay before the Jacksonville game on 10/29. They could easily be 6-1 going into the (thankfully) home game against the Jags.

It was again a horrible fantasy week, with Barb and me going 1-5 between us:

Gotta go make some roster moves and try to stem the bleeding. Next week, 6-0!
Posted by Stewart Bushman at 9:33 AM No comments:

Barb, on her return to the Olney voting booths Tuesday, was interviewed by the Olney Gazette. She commented on the fiasco that was the Montgomery County elections:

Barbara Bushman of Olney, another returnee, said, "It didn't help to get angry, but I was confused as to how this could happen. How could you can have voting and no ballots for people to vote with?"

Bushman said the morning’s problems made her late for work — and she didn’t even get a chance to vote.

"I feel better now," Bushman said after voting Tuesday night. "But now I'm thinking, how could this be a valid election when people couldn’t cast their vote?"

That this sort of boobery could happen just goes to show you that the only difference between a wealthy county and a poor one is that the idiots are rich.

My favorite quote from this morning's WaPo:

Andrea LaRue, a lawyer volunteering on behalf of U.S. Senate candidate Ben Cardin, steps up to the counter with a question for [Montgomery County Election Board President Nancy] Dacek.

"Do you have a chain-of-custody plan for the provisional ballots?" LaRue asks.

You can't make this stuff up.
Posted by Stewart Bushman at 1:56 PM No comments:

One of the things about being a rabid football fan and a fantasy football enthusiast is maintaining perspective. I'm an Eagles fan. That's the most important thing. (Obviously, in the grand scheme of things, that isn't really all that important either, of course.) So the Eagles won and the Cowboys, Giants, and Redskins lost. It was a good weekend.

Of course for every yin, there's a yang. Between us, Barbie and I went 1-5 in our fantasy leagues. Here's the roundup:

A poor record, but not discouraging, as all games were close save the The Fear, who had the misfortune of going against Donovan McNabb and field goal machine Jeff Wilkins. The Fear scored the fourth-highest total in the 14-team league, but they played the highest-scorer of the week. Que sera sera.

Onward and upward!
Posted by Stewart Bushman at 9:12 AM No comments:

Tonight it all begins. Let's break out the crystal ball...

How will the Eagles win eleven games, you ask? I'm glad you did:

That'll do it.
Posted by Stewart Bushman at 1:31 PM No comments:

It's my favorite time of the year...football season, and with football season comes fantasy football season. I've got four teams battling it out this season with my various friends, relatives, and associates. Here's a season preview and some brief analyses. Starters are denoted with asterisks, and bye weeks are listed.

This league has a lot of starters (10) and a very shallow bench (4). Usually the ratio is more like 8:7. While I've got very good to great talent at all of the skill positions, due to the league's structure my depth isn't great, and on Week 7, I may have to start players on bye weeks because I can't afford to replace them all.

I'm not all that happy with this lineup, but it's got potential. I've never played in a league with mandated defensive players, so this'll be a learning experience as well. My guess is they don't matter much, but we'll see.

I love this squad. Solid to rock-star at all skill positions. I should be able to do some real damage here.

Running back depth could be a concern for this team, but QB and WR are in great shape. If you've not noticed, I'm high on Chris Chambers and Steve McNair this season. I originally had Drew Brees and Warrick Dunn, but since Brees and McNair had the same bye, a change was needed. The wife had Eli Manning and Donovan McNabb and needed some help at RB, so I gave her Brees and Dunn for McNabb and Deuce McCallister. We'll see how well that works out.

Barb's in two of the same league's that I'm in. She did pretty well in the drafts, also. I'll be updating her performance here as well:

Personally, I'd like to see T.O.'s hammy bench him for the season and to watch Donte' ascend to the #1 spot in Philly. That'd be good for everyone. Barb got bit by the injury bug early with Dominick Davis bowing out, but since we only start one RB in this league, she was able to replace him easily enough with Fred Taylor.

Najeh Davenport being cut made her pick of Samkon much better, and Donte' as her sixth WR could prove to be a huge steal. I can't say I approve of all of the Giants, but then again I may be biased.

Let the games begin.
Posted by Stewart Bushman at 12:24 PM No comments:

Well, it's official. Robbie Williams's 7th studio album, Rudebox, will be released (outside the US, of course) on October 23rd. It will feature 17 tracks including the titular hip-hop tune, which is singularly mediocre. Most of the other tracks (including collaborations with the Pet Shop Boys and Bill Orbit) look promising, though. I've preordered the Special Edition, of course, despite not knowing what makes it so special. I suspect the standard bonus DVD, but who knows?

Since I've got to order from England anyway, I'm having them throw in the Sin Sin Sin DVD-EP I tried to buy in Italy/Greece/Turkey and this little gem I've heard so much about.
Posted by Stewart Bushman at 10:39 AM No comments:

Robbie Williams - Me And My Monkey


The aforementioned Me and My Monkey video, for the claymation aficionados among you. The color's all screwy, unfortunately.
Posted by Stewart Bushman at 10:29 AM No comments:

Robbie Williams - A Place To Crash


The lastest video from Robbie's Intensive Care album is a quality claymation effort by Steve Edge, who made the great Me and My Monkey video awhile back. Enjoy.
Posted by Stewart Bushman at 11:38 PM No comments:
Newer Posts Older Posts Home
Subscribe to: Posts (Atom)