Posted by Stewart Bushman at 1:03 PM No comments:

Now this seems a little excessive. 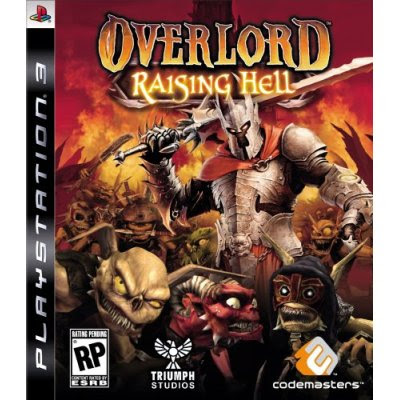 As entertaining as the PS3 demo for Overlord: Raising Hell is, I can't help but think that I could get the same game for my PC for $9 at Amazon:

How am I supposed to justify a $60 purchase for the PS3 game? And yes, it's the same game with additional, previously downloadable, add-on content for the PC and XBox360 versions.
When the price drops down to, say, $30, I may reconsider.
Maybe.
Posted by Stewart Bushman at 1:03 PM No comments:

So apparently two of the stars of the most recent season of Desperate Housewives were Gary Cole and Nathan Fillion. I find this interesting because they are both stars of cancelled-too-soon science fiction TV shows. Gary Cole was the maverick Captain Matthew Gideon of the Babylon 5 spinoff Crusade. Nathan Fillion was the renegade Captain Malcolm "Mal" Reynolds on the phenomenal Firefly.

I find things like that interesting. Few other people do, however.
Posted by Stewart Bushman at 9:51 PM No comments: 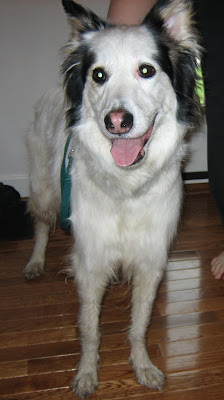 Found this beautiful doggie this morning playing with Roscoe on the front lawn. It looks like he's the lost Raleigh of this Craigslist post. Posting his picture here so his owners can see him.
Posted by Stewart Bushman at 9:45 AM No comments:

Had a good weekend knocking two more titles off of my list. First up was The Golden Compass, an adaptation of the brilliant Philip Pullman novel (originally published as Northern Lights in the UK), first in the His Dark Materials series. It was a decent movie, but it felt like they were trying to squeeze too much source material into a 2-hour running time. They also didn't end the movie where the book did, and as such, it's likely that the movie trilogy will have to be a quadrilogy before all is done. Not that I mind, though. Great effects, decent acting, well-cast. I'd prefer a slightly more plodding extended director's cut someday, though.

Second on the small screen was Juno. Now I've not seen any Best Picture-nominated flicks other than this one and the winner, No Country for Old Men, and I really don't think that Juno is Best Picture material, but Juno was a hell of a lot better than NCfOM. Great little indie comedy with a stellar cast. I'd single out someone for their work, but it wouldn't be fair to the ensemble, which was just wonderful. I will recommend to anyone renting or buying the DVD to watch the deleted scene "Montage," as it shows the original cut of a scene that didn't quite ring true (temporally speaking) in the film.

I also caught Anthony Minghella's final film, a BBC TV production of The No. 1 Ladies' Detective Agency, an adaptation of the wonderful Botswanan mystery novel by Alexander McCall Smith. It was a wonderful little film, full of heart and magnificent scenery. Ultimately, it still felt like a TV movie, though. It probably wouldn't do well in the theatres on either side of the Pond. I hope that the series goes on under the helm of another talented director.

Update 5/17: Watched The Illusionist, just to compare to The Prestige. Didn't like it. Boring. Predictable. Edward Norton was totally phoning it in. Couldn't hold Prestige's jock, even though both movies were utterly ridiculous.

Update 5/21: Managed to watch National Treasure II - Book of Secrets by Redboxxing it on the day of release. Decent film, but not as good as the first movie. Nice setup for NTIII, though. We especially liked the scenes in the rotunda of the Library of Congress, as we've been there before (including down the stairs to the bowels of the LC).
Posted by Stewart Bushman at 12:38 PM No comments:

Just give it one minute and twenty five seconds, and you'll know you've spent your time wisely.