Why does the NFL hate its most ardent fans?

It's no secret to friends and family that I strongly believe that, after 1 November, there should be no outdoor NFL games north of Tennessee that start after 1pm local time. It's cold enough for the fans with the sun up in northern climes later in the season.

So next Sunday, Eagles-Cardinals will be played indoors, in Phoenix, at 3pm Eastern time, while Ravens-Steelers is outdoors at 6:30pm Eastern time.

That is probably the most egregious example of the NFL saying "fuck you, fans willing to shell out the big bucks to watch the games in person, we only care about TV ratings," that I've ever seen.
Posted by Stewart Bushman at 9:48 AM No comments: 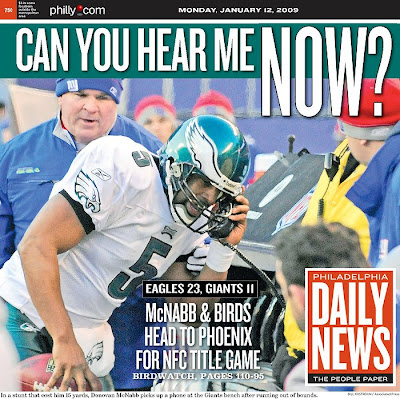 My dad was livid when McNabb picked up the phone. I thought it was hysterical. It was almost as funny as when he mock-ran back Tarvaris Jackson's last pass (which landed in his arms) last week.

I wish more players played with the joy that McNabb does. There's plenty of over-the-top intense players like Brian Dawkins and Ray Lewis. McNabb, except when he's playing poorly, is always smiling on the sideline like he knows how blessed his life is. While I've vacillated on Andy Reid from time to time, I have always wanted McNabb to play his entire career with the Eagles, and if he has a couple more years like this one, he'll find himself in a yellow HOF blazer someday.
Posted by Stewart Bushman at 9:33 AM No comments:

I've been a regular Ben Goldacre reader for years. His regular Guardian column on the pitfalls, pratfalls, and outright dangers of bad scientists, crony scientists, pseudoscientists, and nonscientists is not-to-be-missed.

His piece last Saturday, though, just made me sad. A pregnant, HIV-positive woman was told by an idiot scientist that anti-retroviral drugs and breastfeeding were bad for her and her child. They are now both dead. The scientist is a professor at Berkeley (a public, tax-payer-funded university) who served on the South African Advisory Panel on HIV and AIDS, which effectively murdered several hundred thousand South Africans.

I understand the desire for healthy debate and contrary ideas at educational institutions. I also understand that, in this day and age, stupid people have a sufficient medium (the internet) to become horrifyingly dangerous.

If you aren't outraged, you're not paying close enough attention. California is in a budget crunch. I can think of an easy way for the state to save around $100K. Every little bit helps.
Posted by Stewart Bushman at 1:18 PM No comments:

Best Movie: Wall-E
Honorable Mention: The No. 1 Ladies' Detective Agency
Best Album (that I heard for the first time in 2008): Lily Allen, "Alright, Still"
Honorable Mention: Lyle Lovett, "The Road to Ensenada"
Best Book (that I read in 2008): I read 26 non-board books this year, and none really blew me away. I really enjoyed the Bartimaeus Trilogy by Jonathan Stroud, though, so I'll give that the nod.
Honorable Mention: Walter Mosley, "Blonde Faith," of just for a last mystery with Easy Rawlins.
Best TV Show: The Shield (what a finale!)
Honorable Mention: Doctor Who (what a first-half of a finale!)
Best Board Game: Ticket to Ride Nordic Countries
Best Video Game: Grand Theft Auto IV (100% complete, baby!)
Best Meal: 4th Anniversary dinner, Morels at the Palazzo Casino, Las Vegas
Best Day: The Ides of March, also known as Alex's birthday
Posted by Stewart Bushman at 11:44 PM No comments:
Newer Posts Older Posts Home
Subscribe to: Posts (Atom)