Since I got my PS3 last summer, I've finished up a few PS2 holdovers (GTA: San Andreas, Bully) and a couple of new games (The Godfather: The Don's Edition, Portal). So what's up for this year?

Any suggestions?
Posted by Stewart Bushman at 12:55 PM 1 comment:

I dragged the tremendously-pregnant wife to Capitol Hill on Sunday for a matinee production of Macbeth at the Folger Theatre. Why would I do such a thing to my beloved? Well, first I've never seen Macbeth (Yes, I know. Hard to believe. I've seen Measure for Measure four times yet never managed to catch Macbeth on stage or screen unless you count Scotland, PA). Second, it was co-directed by Teller, who brought more than a little of his magical and theatrical know-how to the production, which was pretty much spectacular. The Washington Post agrees with me on that.

Great production, start to finish, and I can't think of too many places better suited to watch a performance of the Bard's finest than the balcony at the Folger. There we were in our seats, leaning forwards on the railing above the first row in the orchestra, stage right.

Awesome. And a hell of a lot cheaper than Coriolanus and The Tempest (en Français) at the Kennedy last year.
Posted by Stewart Bushman at 11:05 AM No comments:

A fun idea for the Eagles.

Sign Shaun Alexander, who is sure to be released from Seattle in a few weeks.

Line Brian Westbrook up as a WR. Every play.

If Alexander is healthy enough to run like the former Pro Bowl player that he is, it'd be an offensive formation sure to give defensive coordinators nightmares.

Then, bring in a dozen or so BIG WRs (6'2" or taller), mostly late rounders or undrafted rookies and find one who can learn (and execute) the playbook. If none of them can, bring in another dozen. Wash. Rinse. Repeat.

Drafting WRs early is worse than a crapshoot, never pays off in the short term, and costs a fortune. There's sure to be a few Marques Colstons out there.

Oh, and sign a veteran punt/kick returner. Westbrook is electric, and he may have to return a punt when the game is on the line, but he's dangerously exposed out there. As soon as Allen Rossum was available, they should've jumped on him.
Posted by Stewart Bushman at 3:24 PM No comments:

FINALLY saw The Darjeeling Limited last night! Loved it. I hope they do an extended cut SE or Criterion release someday with tons of extras to enjoy.

The writers strike gave me and Barb the rare opportunity to catch up on some TV that we had missed over the last year or two or three. We plowed through Season 1 of Dexter (not the edited CBS version, thank you very much) and Seasons 2 and 3 of Entourage (which I really enjoy, despite the hating its gotten lately). We're halfway through Season 2 of Dexter and Season 4 of Entourage, and we should be done with both well before the regular shows return in April (Battlestar Galactica, The Office, House, and Scrubs being the only ones I care about). If we're really diligent, we may be able to get through Season 6 of Curb Your Enthusiasm as well. On deck after that: Deadwood.

If G-d really didn't want Jews to eat bacon, he wouldn't've made it so darned tasty.

I'm sure I could down a few of these tasty breadless BLTs. 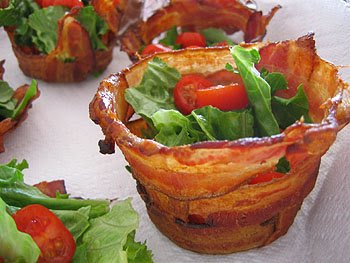 Thanks to Burnt Fat for the tip.
Posted by Stewart Bushman at 11:39 AM No comments:
Newer Posts Older Posts Home
Subscribe to: Posts (Atom)