NJGSS: A new lease on life!

I don't post too often these days, so you can probably scroll down to see what I'm talking about here, or click here and here.

The short of it is that a NJ State summer program for their best and brightest was defunded by Gov. Jon Corzine, and, as an alumnus, I was hoping it would be reversed.

Well it looks like it's going to happen, but not quite as I'd envisioned. According to the Star Ledger, of the $1.9M budget the program needs per year, they've managed to raise $1.7 million in private donations in less than a month, including a $200,000 gift from a 36-year-old NJGSS alumna. There's a lesson here about supporting your best and brightest that will probably be lost on politicians, but it's an immeasurable success for the human race, in my humble opinion.

I'd rather see NJ tax dollars support these kids in the future, but it's a start. Not a very libertarian position, I know, but if they're going to collect taxes, I can at least hope they're going to pay for something worthwhile.

Now, can you find me in this class picture?
Posted by Stewart Bushman at 12:34 AM 1 comment:

A theater, DVD, and cable review, all tied with a bow for your viewing pleasure

Lucky Number Slevin: 2.75 Stars. For once all the reviewers were right. This elegantly wallpapered mash of Pulp Fiction and Lock, Stock, and Two Smoking Barrels is long on style and short on much else. Still, it was a good time with lots of star power. Josh Hartnett turns in is best performance since 40 Days and 40 Nights. Bruce Willis, Morgan Freeman, Stanley Tucci, and Sir Ben Kingsley (sporting a ridiculous accent) show off their high-caliber talent. The real surprise in this film, though, was Lucy Liu, who, it turns out, can do more than look cute with a blank expression on her face. Kudos to her, and may she find more roles where she doesn't have to kick anyone's ass.

The Constant Gardener: 2.75 Stars. All of those critics out there who called this a "taut thriller" and other such spy-movie accolates need to be beaten. There wasn't much thrilling about this movie, and it certainly wasn't a spy flick (and that's what Barb and I were in the mood for when we rented it). Having said that, it was still pretty good, if dreadfully slow at times. It was a surprisingly English film for the Brazilian director of the phenomenal City of God, and while John Le Carre might find that a compliment, it's not really meant as one. The sort of it is that diplomat Ralph Fiennes's leftist wife, Rachel Weisz, is brutally murdered, and Fiennes tries to find out whodunit. However, it's not much of a mystery (your standard corporate bastards in search of profits above all else). This flick does redeem itself at the end, though, which borders on sublime.

Bridget Jones: The Edge of Reason: 2.75 Stars. Considering how much I enjoyed the original Bridget Jones' Diary, it's surprising that I only managed to catch this on Encore last week, but in the end, I was glad I didn't pay to see this in the theater. The usual suspects are back, and as stereotypical as ever. Renee Zellweger looks far better with some extra poundage on her usually skeletal frame, but for some reason the script has her behave more cartoonish than ever. Hugh Grant and Colin Firth are their usual seedy and staid selves, respectively. The real problem with this movie is that they had Bridget getting locked up in a Thai prison. While they made the most of it (it was more a Broadway musical's interpretation of a Thai prison than the real deal), it was still too silly for a purported romantic comedy. They manage to salvage the thing by the end, though, and cap it off with a repeat of the 1st film's Cleaver-Darcy fight to The Darkness's "I Believe in a Thing Called Love." There's also a Robbie Williams tune for your auditory pleasure. Perfect cable viewing.
Posted by Stewart Bushman at 9:03 AM 2 comments:

On the Netflix page for the Firefly DVD, another cancelled-too-soon TV show, Wonderfalls, was recommended. I ordered the first DVD, and I was totally blown away.

I can't believe that this show was even conceived of, much less produced. The lovely Caroline Dhavernas plays Jaye, a Gen-Y slacker Ivy League grad living in a trailer park and employed in a tourist gift shop at Niagara Falls. She also receives instructions from talking inanimate objects which she must follow to help people, and bad things happen if she refuses. The genius in the show is that everything she does (or doesn't do) causes things to happen indirectly. It's like a Rube Goldberg machine with people. It's also fun to watch a somewhat self-absorbed, semi-nihilist being forced to help people. Plus, it's got the remarkably versatile Bill Sadler as her father!

The dialogue is crisp. The acting is excellent. The camerawork is inspired. The effects are solid. Fox aired it opposite CSI and it lasted 4 episodes. I wish they had moved it to FX and given it a chance.

Fortunately, the 13 that were shot made it to DVD. DVD 2 should be arriving soon!
Posted by Stewart Bushman at 9:55 AM No comments:

A giant leap in the right direction.

This Op-Ed in yesterday's Washington Post practically had me doing handsprings in my backyard.

For those who like summaries, Patrick Moore, cofounder of Greenpeace, is now endorsing nuclear power. He's finally come to the realization, as I did more than a decade ago, that nuclear power is a hell of a lot better for the environment than fossil fuel-burning plants. He discusses the zero carbon dioxide emissions, reliability, present ubiquitousness (over 20% of power in the US is nuclear), and, yes, safety. If a green can finally say that "Three Mile Island was a success story," which it was since the reactor contained the meltdown, the world must be moving in the right direction.

A couple weeks ago I wrote about the New Jersey Governor's School in the Sciences being potentially defunded. I mentioned that I wrote letters to NJ Gov. Jon Corzine and State Senator Tom Kean, Jr., whose father founded the Governor's School program, urging them to support the worthy program that I'm an alumnus of.

While there's been no news on the funding status, I did get a very nice letter back from , who, despite his picture, is actually older than I am. It was obviously a form letter, but a very nice one indicating his support. Read it at your leisure: 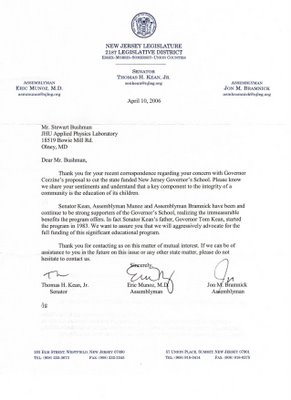 The Philadelphia Inquirer also ran a great op-ed opposing Corzine's cuts. Jonathan Last makes the same point my dad did when I discussed it with him: within the public school system, "you're only special if you're disabled." It's a bit cruel worded that way, but special ed. programs are funded through the roof while gifted and talented programs like NJGS are few, far between, and one more appears to be gone. Perhaps there's hope, though.
Posted by Stewart Bushman at 8:20 PM No comments:

Interesting to me, likely not so much to you...

Clearly I've spent far too much time doing math and not nearly enough chopping trees. I just realized that there are two distinct definitions and pronunciations of "axes."

Well there you have my observation for today.
Posted by Stewart Bushman at 12:43 PM No comments:

Slither: 2.5 Stars. My curiosity about this film was piqued when I saw that it (at the time) had a 90% score on rottentomatoes.com. I think this is a classic example of a movie exceeding its expectations, much like it fell short of mine once I saw the glowing reviews. There's a lot of good stuff in this film: fun effects, gory deaths, slimy slugs slithering to and fro, Nathan Fillion. But even Capt. Mal Reynolds couldn't do too much to make this film anything more than watchable. The great Michael Rooker also looked horrible even before he got infected. Fortunately he looks healthier on Thief, so I imagine they wanted him to look like Montgomery Burns, but I can't see why he went along with it. Lastly, Elizabeth Banks is hot. Real hot. So show some skin, this is a horror movie fergoodnesssakes!
Posted by Stewart Bushman at 11:27 AM No comments:
Newer Posts Older Posts Home
Subscribe to: Posts (Atom)