Those Idiot Bastards at ABC.

Is ABC really telling us that they think reruns of bad sitcoms (and According to Jim and George Lopez are among the worst) are more worthwhile than episodes of Day Break that they've already paid for?

Putting episodes online sucks. Streaming video sucks. Let me at least download it and play it on my TV.

And to top it off, they won't even put the new episodes online until their normal weekly slot.
ABC has only two good shows (Boston Legal being the other), and they just killed one.
Nice work.

I don't know whether to be disgusted or disappointed. Day Break would be better served on FX or pay TV.

Aargh.
Posted by Stewart Bushman at 11:51 AM No comments:

Foxtrot, one of only 3 newspaper comics worth reading these days (the others being Pearls Before Swine and Dilbert) is going to a Sunday-only format at the end of the year.

Guess I'll have to give Get Fuzzy a chance.
Posted by Stewart Bushman at 9:17 AM No comments: 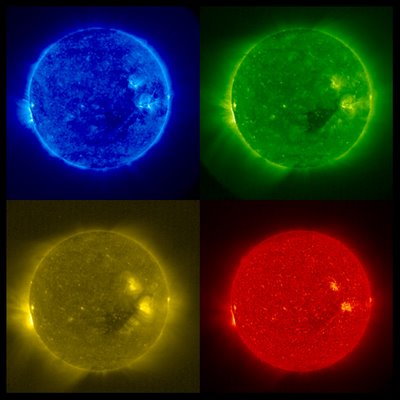 
Check out the rest here.
Posted by Stewart Bushman at 8:59 AM No comments:

I admit it, I watch more TV now than I ever did before. Most of it, I think, is because DVR technology makes it so much easier to watch TV on my own schedule, but there's definitely some damned good stuff on the small screen. I posted a year ago about the worthwhile shows on TV, and my list didn't include perennial ratings champs 24, Lost, and Desperate Housewives. It still doesn't. I also avoid all reality shows except The Amazing Race. I'm still watching Boston Legal, Battlestar Galactica, Doctor Who, Scrubs, and Iron Chef America. I've given up on Nip/Tuck, but I'm eagerly awaiting the next seasons of The Shield, Rescue Me, and It's Always Sunny in Philadelphia (which, since they added Danny DeVito, is ridiculously funny). I've also started watching Heroes, Studio 60, and Daybreak, both season-long serials that I typically eschew. Heroes is remarkably well-written, well-cast, and well-done...plus it's tailored for the comic book lover in me. Studio 60 is just captivating enough to make me come back every week, but if it went away, I wouldn't mourn its passing.

Daybreak is another story. The acting isn't always stellar (although the great Adam Baldwin has perfected the endearing asshole character), but the story and the gimmick is just plain good TV. It's far better than the other litany of serialized dramas that have been cancelled this season, but, like the rest, it's going the way of the dodo. And that's a damned shame. The least they could do is air the episodes they've got in the can, but it looks like I'll have to stream them online.

Dangit.
Posted by Stewart Bushman at 11:52 AM No comments:

Nate "Dogg" Barlow and Nick "Famous" Cornish for 40% off!

For those out of the loop, Google Checkout is bleeding money to get our business. Nowhere is this more evident than at Buy.com. They're offering $20 off of a $50 order and $10 off of $30, and you can place as many orders as you like. The only caveat is that they have to be in stock.

For this most part, this is a Graphic Novel lover's dream, as most GNs cost around $10, and that's basically a 5-for-3 deal. Pretty snazzy.

But if you're a fan of the great Nate Barlow and Nick Cornish, it works out to a pretty decent deal on their premier DVDs:

Why I (for the most part) Stopped Going to the Movies

I love movies. I've always loved movies. It used to be my standard M.O. to go see a movie every weekend. Sometimes several movies. I've seen some of the most divine, divisive, and disappointing films to grace our theaters over the last 33 years.

Now I can't go to a movie without hearing some jackass's phone ringing, or witnessing some kid text messaging on their blindingly bright phone. When I went to see Casino Royale last weekend (my first movie since September), I caught a 2:15 matinee on Friday. I figured the digital set wouldn't be out that early. Wrong. In the row in front of me, some dude's phone rang twice before he actually ANSWERED it. Guess it would've been rude to turn it off.

Then, at one point in the movie the dude and both of his friends were all checking their text messages a the same time. Those phones are frickin' bright in a darkened theater.

And don't get me started on frackin' Vibrate mode. I can hear it when your phone is vibrating. Everyone can hear it. Turn off the damned phone. There is NOTHING, yes I mean NOTHING, that is so important that you can't be out of touch for 2.5 hours.

You might think that's not the case, but you're wrong. You have what's commonly known as an inflated sense of self-importance. Get some perspective. That email doesn't need to be returned ASAP. If it did, you'd be at work. If someone in your family is dying, or deathly allergic to something, I'm sure whomever is with them knows how to use an epi pen, or to call the paramedics. You're not going to rush home to give anyone CPR, are you? No, I didn't think so. Oh, you're a doctor? Well it's a good thing there are other doctors; a whole lot of them. Some are probably more talented than you are.

Give it a rest. Turn off your phone. Or, better yet, leave it in the car. That way when you "forget" to turn it off, only your leather seats have to hear "Toccata and Fugue in D Minor."

And kids, that backlight is BRIGHT. The only reason I'm not saying anything is that the disruption I would cause by calling you out would be worse than the one you're causing. Get out of the theatre.

Only one film I attended this year, Pirates of the Caribbean 2, was interruption-free. The theater had a very nice "zero-strike" policy regarding such things. Your phone rings, goodbye. You're texting, hasta la vista. Guess what? Great moviegoing experience.

Get your act together, theatres. It's already cheaper for me to buy the DVD than it is to buy two tickets to watch the thing on the big screen.