I gave the game a spin last night...my first impression was that I was a bit disappointed in the antialiasing (i.e. there's still a bit of choppiness at the edges of moving characters/cars, etc, but that may be because I've got 1080i rather than 1080p) and there was a hiccup in the rendering of the opening cutscene. I immediately switched my controls back to "classic" GTA ones (I'm not about to learn a different interface...interestingly, the tutorials and instructions adapt to the alternate control set) and turned on the subtitles and immediately rewatched the opening sequence (without the hiccup) to figure out what dialogue I missed (I noticed that the Serbian is translated when the subtitles are on, but, at least in the opening, they don't automatically subtitle the translations.) I really like the "fade car audio" feature while people are speaking, even if I miss a bit of the hilarious radio station banter.

I haven't decided whether or not I like the added grittiness of the game...one of the reasons this series has been so great is that the violence is fairly cartoonish (somehow I doubt El Burro will be showing up). The visuals are certainly gorgeous, and the buildings in the distance are done really well (I swam across the harbor to see how they looked as I got closer...then I got 6 stars and died...the dying sequences are really nice, too).

Interestingly, Rockstar has incorporated some of the changes to the game from their far-less-violent game, Bully. The new health and armor bars and the "police radar" are right out of it.

So far it looks pretty damned impressive, and they seem to have done a very good job building a decent story around all of the visual splendor. I'll probably have to play this game for 40-50 hours before I figure out the map, if I ever do (San Andreas took easily that long, but wide stretches of nothing were easy to map in my head).

I also want to try out the online multiplayer feature...for some reason it didn't seem to think I was online, but according to Wikipedia, there are still some online issues to work out.

And lastly, when reading the credits I saw that The Great PJ Sosko (UR '93) voices Gerry McReary. I think the last time I saw him was in an NPH-directed play somewhere in LA. He's a good man, deserving of such a plum role.

Blast from the Past

Frankly, I don't know anyone who would find this interesting except me, but isn't that the ideal thing to write about in this most-narcissistic of oeuvres?

So, once upon a time, there was a company called Infocom. Most of you over the age of 20 will probably heard of it. Most of you, period, will have at least heard of their most famous product, Zork.
Back when I was in my pre-to-mid-teens, $50 at the video game store got you white text on a blue screen, and, while that time has past, it was a hell of a way to play a game back then. The game developers didn't need fancy graphics, but they did need to know how to tell a story, and tell it well. Hence the gaming style called Interactive Fiction (IF). Infocom was the last word in IF until they extended themselves too far and developed a database program (Cornerstone) that ultimately sunk the company, whose assets were bought by Activision. In my humble opinion, their masterpiece was a story centered around the development of the atomic bomb called Trinity. I believe that game, more than anything else, stoked my still-burning interest in the Manhattan Project.
Infocom's second-best selling game, after Zork, was an interactive fiction version of Douglas Adams' The Hitchhikers Guide to the Galaxy, which was nearly impossible to win, but was a damned good game nonetheless.
Well, it turns out that Infocom tried to create a sequel to HHGTTG, entitled Milliways, and Andy Baio at waxy.org has the scoop. You can find my comment somewhere towards the bottom.
Posted by Stewart Bushman at 3:13 PM 2 comments: 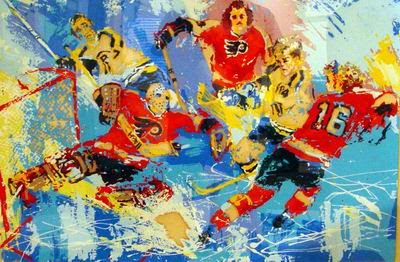 I'll freely admit that I pretty much stopped watching hockey after the work stoppage a few years back. As far as I'm concerned, the Flyers are only behind Eagles Football, Illini Basketball, and Illini Football in my canon of favorite teams, but once I went a year without the puck, I didn't really feel any urgency to start watching it again (and given the ratings, lots of other folks agree). I maybe watched a game or two on the 12-foot screen just to appreciate how pretty hockey is in HD, but that was all.

However, given the Flyers managed to reach the postseason vs. the local Caps, I wanted to see what the latest incarnation of Black and Orange was like. Most of the pundits didn't give the Flyers a chance in hell against the Caps star Ovechkin, and if I didn't have a newborn at home, I would've gotten some scalped tickets to the first few games given the Verizon Center is only a metro ride away. So I settled down on Friday night with my dad and watched some hockey.

Holy crap, what a great game. Even with the Caps coming back in the 3rd period to overtake the Flyers' 2 goal lead, it was one of the best games I've seen in years. Flyers 0, Caps 1.

Then came game two on Sunday, a 2-0 shutout pitched by the Flyers' Martin Biron. Flyers 1, Caps 1.

Game 3 was a 6-3 buttwhooping that ended with my favorite play in all of sports, the dagger-in-the-heart empty net goal. Flyers 2, Caps 1.

And last night was Game 4....it was like Rocky vs. Apollo Creed. The Flyers got off a goal in the first minute of play, and then 3 minutes later the Caps respond with a power play goal, and then another before the Flyers tied it up before the end of the first period, 2-2. Then the scored in the 2nd, followed by the Flyers with 10 minutes left in the 3rd. 3-3, Overtime. Second Overtime. Goal, Flyers. Flyers 3, Caps 1.

Game 5's tomorrow afternoon in D.C., and I'd probably go if it weren't just before the first Seder and we'll have 8 houseguests, but you can damn well bet that it'll be on the TV.

I'd still rather they shrink the NHL season from 82 to a more reasonable 40 or so games, but I just might start watching the regular season again this fall.
Posted by Stewart Bushman at 10:53 AM No comments:

Back in the Woodbine Palace in snowy Rochester, NY, we'd spend most nights playing Euchre and watching Beavis and Butthead at 11pm and Alternative Nation at midnight. When this video came on, all play stopped. It was my first introduction to Milla Jovovich, before the craptacular Fifth Element and the surprisingly solid Resident Evil trilogy. I still listen to this album (The Divine Comedy) from time to time. Good stuff.

Posted by Stewart Bushman at 4:50 PM No comments:

Battlestar's premiere was lackluster. I'm still wondering how they're going to explain how Cylon Tigh has managed to grow old with Adama. Do Cylon skin jobs age? Also, how did Starbuck survive? Where'd she get that shiny new ship?

Methinks the writers have bitten off more than they can chew.

On the bright side, Torchwood has been surprisingly solid this season and Doctor Who is coming back in a few weeks.
Posted by Stewart Bushman at 1:11 PM No comments:

Beware the Ides of March

If you are in any sort of way in communication with me, you know this already, but for the rare visitor who's not, on 15 March 2008, Alexander Evan Bushman was born. 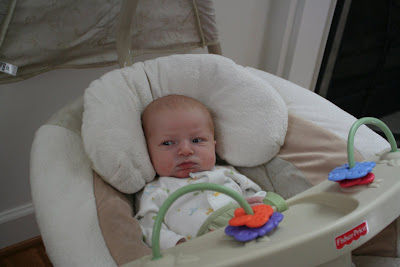 You can see more pics of Alex as he grows up at the new family blog: the_bushmans.
Posted by Stewart Bushman at 10:23 AM No comments:

The best of TV's coming back in the next 7 days, but I managed a free Redbox rental yesterday to finally catch Stardust, which I thought was great, if a bit predictable. I'm sure it tanked at the box office because everything fantasy not named Harry Potter tanks at the box office.

Still, a great, funny, well-done film from a superlative source.

I also caught Enchanted a few days ago. I rented it for the wife, as I thought she'd enjoy it. I was right. It's a cute film, also well-done, if a bit ridiculous at times (even for the genre). It's a shame three songs from it were nominated for Oscars, and consequently split the votes, since That's How You Know would've been a shoo-in nominated alone.

Update 4/10/08:
And, seriously, I just watched my first Blu Ray movie, The Prestige, on my 5-month-old PS3. The picture is insanely good, although the menu interface was a bit odd to deal with (I've tested out Ratatouille BD, which has more standard menus, but haven't watched it). The movie was also outstanding. I'm not sure if you'd call it a thriller, or a period drama, or a mystery, or a fantasy, but it's just plain great.

Update 4/15/08
Two movies in two days! Knocked out Sweeney Todd - The Demon Barber of Fleet Street on Sunday and No Country for Old Men last night. To be honest, I was underwhelmed by both films. Sweeney was all style and no substance, and I found that I wasn't emotionally invested in the fate of any of the main players. No Country seemed paced all wrong, like it didn't know what sort of film it wanted to be. It was like David Mamet wrote an action movie, but without the snappy dialogue. On the plus side, the always radiant Kelly MacDonald (whom I've loved since Two Family House) does a wonderful job with limited screen time, as does Josh Brolin, who is the only three-dimensional character in the movie. Frankly, I don't know how it won the Best Picture Oscar, but I still need to see Juno, Michael Clayton, Atonement, and There Will Be Blood to speak intelligently on what I would have chosen. I'll catch two of those by week's end.
Posted by Stewart Bushman at 10:13 AM No comments:
Newer Posts Older Posts Home
Subscribe to: Posts (Atom)